Chat With Us
You are here: Home / Learning Centre / Singapore Corporate & Personal Taxation / Not Ordinarily Resident Scheme (NOR)

Singapore has been reinforcing its reputation as an international business centre by carefully fine-tuning all aspects of the business landscape that are essential for fostering a vibrant enterprise environment.  Singapore is home to 7000 multi-national companies in diverse sectors including finance, engineering, IT, media, communications and oil and gas. The clean, green and low-crime environment of the island state has attracted expatriates to work here.  Alongside a world-class local workforce, the government understands the significance of drawing international talent to its shores.

Tax is an important element in this matrix and Singapore’s tax regime is one of the most competitive in the world. Besides maintaining a very attractive corporate tax regime, the Singapore tax department is also carefully calibrating the personal tax rates. For this it has looked beyond nurturing an ideal environment to live, work and play; it has focused on the tax implications on the earnings of the expatriates. Expatriates are now posted on shorter stints and they do not have an elaborate package nowadays. Singapore has attractive tax incentives for highflying expatriates posted in Singapore, Not Ordinarily Resident (NOR) Scheme is one among them.

Singapore citizens, permanent residents and foreigners, who have stayed and worked in Singapore for more than 183 days in the year before the YA is regarded as residents for the purpose of tax. Their incomes are subjected to resident tax rates ranging from 0% to 22%, depending on the amount of chargeable income. This is considered to be very low as against that of other developed countries. The OECD has an average rate of 41.7% and Asia has an average rate of 26.9%.

The employment income of Non-residents is subject to a flat rate of 15% or a progressive residential tax rate, whichever results in higher tax amount and no deductions are allowed.

It must be noted that director’s fees, net consultation fees and all other incomes such as rental income, royalty and interest  will be subjected to 22% from YA 2017.

When are you considered a non-resident?

If you are a foreigner and have stayed in Singapore for period of 61-182 days you will be considered a non –resident. If you are employed for 60 days or less you will be still regarded as non-resident , but your income from such short-term employment of 60 days or less in Singapore will be exempted from tax. However company directors, entertainers and professionals are not entitled to this exemption. If the absence from Singapore is incidental to Singapore employment the exemption is not applicable.

What is the Not Ordinarily Resident (NOR) Scheme? 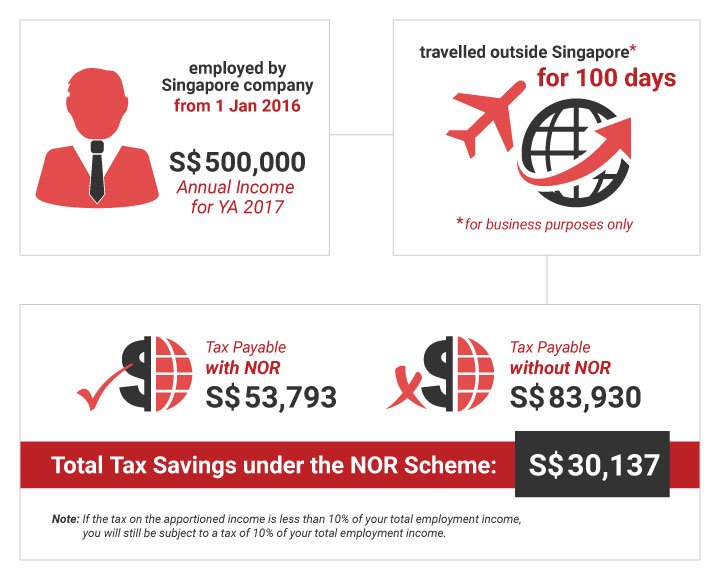 The objective of the scheme is to promote international companies to base the hub of their regional operations in Singapore. The favourable tax treatment of the expatriates’ income is effective in attracting top international talent that complements the local workforce and in turn brings investment and capital.

Qualifying criteria for NOR status

Mr. John, a Singapore non-resident for tax purposes in YA 2014 to YA 2016, started working in Singapore from 01 January 2016 and was accorded NOR status in YA 2017. His annual Singapore employment income is S$450,000. He travels out of Singapore for work frequently; in 2016 he spent 100 days out of Singapore. He has an earned income relief of S$1,000 for that YA. Tax payable by Mr. John, with NOR tax concession and without the concession in YA 2017 is as below.

* Total tax payable S$43,492.47 is less than 10% of the total employment income. The income must be re-grossed to compute the minimum tax payable under the time apportionment tax concession.

File your tax returns with Singapore Company Incorporation, one of the leading tax agents in Singapore. Our professional taxation specialists will work closely with you to reduce your tax liabilies and maximise tax savings.